The CELAC Supports Argentina’s Rights with Regard to the Falklands 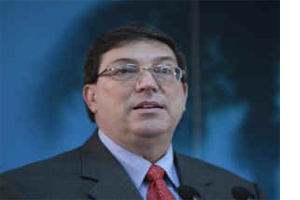 The CELAC Supports Argentina’s Rights with Regard to the Falklands

HAVANA,  Mar 27 – Cuban Foreign Minister Bruno Rodriguez expressed at the United Nations the support of the Community of Latin American and Caribbean States (CELAC) for the legitimate rights of Argentina in the dispute of sovereignty with regard to the Falklands.
The Cuban FM gave a press conference at the UN headquarters on behalf of the CELAC, of which Cuba occupies the pro-tempore chairmanship, the Cuban newspaper reported on Wednesday.

Rodriguez pointed out that the resumption of talks between the governments of Argentina and the United Kingdom is in the permanent interest of countries in our region, so a peaceful and definitive solution can be found as soon as possible, in accordance with the appropriate approach of the United Nations and other international organizations.

This entry was posted in Cuba, International, Society and tagged CELAC, Cuba. Bookmark the permalink.