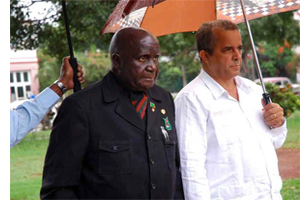 HAVANA, Jun 3 – The African nationalist leader Kenneth Kaunda, Zambia’s first President (1964-1991), said in Havana that Cuba is an example of independence and the struggle for human emancipation. The homeland of José Martí is a wonderful place for human development, he said, after placing a wreath at the African National Heroes Park, as part of the activities he is undertaking during his official visit, which began today, and will run until next Friday.

Under persistent drizzle that at times intensified, the Zambian political teacher, of 89 years of age, expressed admiration for the physical and moral strength of the Commander in Chief Fidel Castro, and appreciated the efforts of the Cubans to continue the example and preserve the legacy of historic leader of the Revolution.

Kuanda highlighted the role played by the African Union (successor of the Organization of African Unity), during its 50 years of existence, in the fight against exploitation, poverty, crime, corruption and hunger, and stated that the main challenge today for that organization is to remain true to its founding principles.

During the ceremony and subsequent contact with the press, Kaunda was accompanied by Kenia Serrano, president of the Cuban Institute of Friendship with the Peoples, and Hector Igarza, head of the Sub-Saharan Department of the Ministry of Foreign Affairs.

The visitor’s agenda includes meetings with Cuban leaders, and tours through the capital educational centers.