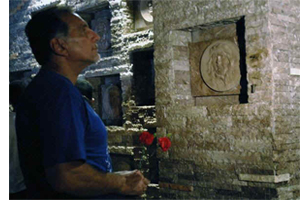 Cuba,  June 18  –  Cuban hero Rene Gonzalez paid homage on Monday to Cuban-Argentinean guerrilla fighter Ernesto Che Guevara at the memorial that treasures his mortal remains in the central city of Santa Clara. Gonzalez is one of the five Cuban anti-terrorist fighters, who were arrested in 1998 and given unfair and extremely long sentences in the United States after they monitored Florida-based ultra-right organizations that planned terrorist actions against the island.

He returned to Cuba after having met his 13 year-prison sentence and following the approval by US authorities to modify his supervised freedom conditions in exchange for the renouncing of his US citizenship.

At the mausoleum, Gonzalez and his family paid honors to Che and his compatriots killed in Bolivia.
Paying tribute to the Heroic Guerrilla is a compromise with his legacy, said Gonzalez.

Yudi Rodriguez, member of the Communist Party Central Committee and Jorgelina Pestana, president of the provincial government welcomed the Gonzalez family as they arrived at the Comandante Ernesto Che Guevara Revolution Square, a complex that includes the mausoleum.

During the ceremony in front of the niche that treasure Che’s remains, Gonzalez said that Guevara will always live as far as there are people like the Cubans who, Che and his four compatriots still held in US jails belong with.

Gerardo Hernández, Fernando González, Antonio Guerrero and Ramón Labañino are the four anti-terrorists who, along Gonzalez, are internationally known as the Cuban Five.

The hero recalled that he had the chance to shake Che’s hand when he was still a child, an event that left an imprint as strong as the news about his death in Bolivia.

Che is the reason for daily renewal, and in this historic stage, he continues to be a crucial example, said Rene meaning that Cubans must resort to Che’s critical thinking and ask themselves if what has been done can still be improved.

The saddest thing is that my four brothers are still in jail; every single day in prison is a crime committed against them, because there is no reason for people like them to be under such conditions, he pointed out.

Following a tour of the museum that treasures documents, photos and other belongings of Che Guevara, Gonzalez held a moving encounter with leaders of the Young Communist League and the University Student Federation.