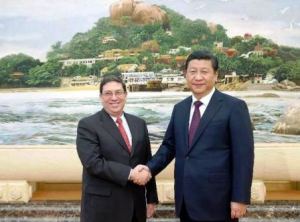 HAVANA,  Nov 8 – China’s President Xi Jinping stressed his country’s relations with Cuba during a meeting in Bejing with Cuban Foreign Minister Bruno Rodriguez, who wound up an official visit on November 7 to the Asian country.
Xi Jinping, who is also the general secretary of the Chinese Communist Party, said that China and Cuba must keep boosting relations at the highest level, sharing experiences and deepening cooperation in the international arena, PL news agency reported from Beijing.

The Chinese head of state recalled previous meetings with President Raul Castro and with Revolution leader Fidel Castro and he stressed the importance of boosting relations with Cuba and with other Latin American and Caribbean nations.

During his stay in China, the Cuban foreign minister also met with state advisor Yang Jiechi on bilateral relations, the Community of Latin American and Caribbean States and the upcoming summit of that bloc, which is scheduled to take place January, in Havana.

Rodriguez also held talks with Chinese foreign minister Wang Yi, who said that China and Cuba are experiencing a new stage in their bilateral relations, marked by cooperation links that have expanded to unprecedented levels in some sectors.

The Cuban foreign minister kicked his official agenda in Beijing by giving a key-note lecture at the Chinese foreign ministry on Cuban reality. He referred to the impact by the US economic blockade of the island, which he described as obsolete and a relic of the Cold War period.

Rodriguez also explained about the opening of a Special Development Zone at the Mariel Harbor, located west of Havana and said that the project offers countless business opportunities to entrepreneurs from China and many other countries.