Cuban Digital Encyclopedia to Evoke Victory in Bay of Pigs 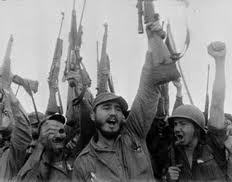 Cuban Digital Encyclopedia to Evoke Victory in Bay of Pigs

The Computing and Electronics Clubs (JCCE) invited the people to participate in the project EcurRed for Cuba, which will be held in Playa Giron Museum, located to the South of the province of Matanzas, about 200 km southeast of Havana.

That day participants will have access to the presentation of theEcu mobile with images for cell phones with Android operating system and interact with the database, informed the JCCE through a communique.

Cuba will celebrate the 53rd anniversary of its victory over an invading force composed of 1.500 men, equipped and trained by the US government.

The ceremony will take place in Playa Giron, on the right flank of the Bay of Pigs, the last occupants’ redoubt, who were defeated in less than 72 hours.