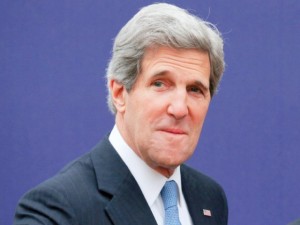 Kerry, the First US Secretary of State in Havana in 70 Years

Washington, Aug 14 – US Secretary of State John Forbes Kerry will lead today the official flag-raising ceremony at the US Embassy in Havana, 70 years after the last visit of a US Secrertary of State to Cuba.

In March, 1945, Edward Stettinius, the last Secretary of State under Franklin D. Roosevelt and the first under Harry Truman, travelled to the Island in the wake of the power transfer from Fulgencio Batista to Ramon Grau San Martin.

By then, John Kerry, who was born on December 11, 1943, in Aurora, Colorado, was little over one year old. A whole life and, in parallel, a long history of Washington’s aggressiveness towards Cuba had to pass for him to become the first top US diplomat to set foot on Cuban soil after the Revolution of 1959.

Kerry became one of the faces of the thaw between the United States and Cuba in the wake of statements issued on December 17, 2014, by Presidents Raul Castro and Barack Obama on the decision to establish diplomatic links and advance towards a normalization of bilateral relations.

Kerry studied at the Yale University, but before completing his stuydies, he was recruited by the US Navy. Later, in 1976, he graduated from the Boston College Law School.

Back in his country after taking part in the Vietnam War, Kerry opposed the conflict and later worked to guarantee benefits to the veterans.

Once he graduated, he worked as district attorney of Middlesex County, Massachusetts, and in 1982 he was elected lieutenant governor of that state.

In 1984 he won a seat in the Senate, where in 2009 he was president of the Foreign Relations Committee and a member of other panels dealing with finance, trade and attention to small businesses.

He favored a change in relations with Cuba.

In 2004, he was nominated for the Democratic Party to vie for the White House, but he was beaten by Republican George W. Bush, who won his reelection.

After 28 years in the Senate, he assumed the post of Secretary of State, dealing with tense situations in the diplomatic field, like those linked to the conflicts in Syria and Ukraine, in which the Us goernment and its allies have a direct involvement.

He also promoted, directly of through his subordinates, both the process of Washington/Havana rapprochement and the multilateral negotiations on the Iranian nuclear programme that ended with the agreement signed in Vienna in July.

His approaches on politics and the environment are included in two books written by him-both best sellers´”titled “A Call to Service; My Vision for a Better America” and “This Moment on Earth,” the latter co-authored by his wife, Teresa Heinz.(Prensa Latina)