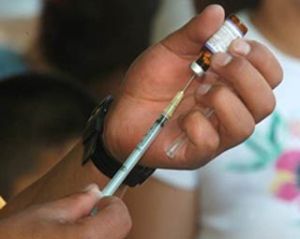 Havana, Jan 11 –  An inactivated vaccine (IPV) against all viruses which cause Polio will be supplied as of today by injection to Cuban children, as part of the 55th national campaign to eliminate definitively the disease.

The vaccine will be administered to all infants born from January to September 2015, Dr. Francisco Duran, national director of Epidemiology at the Ministry of Public Health (MINSAP), said in recent statements to the press.

The children turning four months will simultaneously receive this high quality dose in doctor’s offices and polyclinics, he added.

Duran said that the effectiveness of IPV, applied since 1955 in other nations, declared free of poliomyelitis, except Pakistan and Afghanistan, where even a few cases are reported, is proven.

According to the physician, the application of that immunogen, developed in the Netherlands, starts from the decision indicated by the World Health Organization (WHO) with the aim of eradicating the disease by 2019 in the planet.

Those researches the island has developed with WHO since 2005 influenced in that reality.

Regarding that, Doctor Sonia Resik, an specialist of the “Pedro Kouri” Institute of Tropical Medicine, stated that to achieve this objective, it is necessary to gradually pause the oral vaccination to that produced with inactivated (killed) poliovirus vaccine.(Prensa Latina)