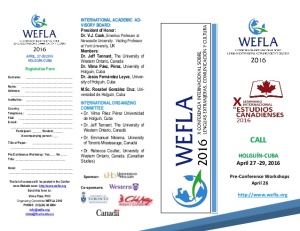 Holguín, April 13 – The 10th International Conference on foreign languages, communication and culture (WEFLA), sponsored by the Department of Canadian studies at the University of Holguin, will be held in the resort of Guardalavaca from April 27 and 29.
PhD. Vilma Paez, organizer of the event, told ACN the essential premise of the meeting is encouraging the exchange of ideas and experiences among professionals, academics and students to strengthen the bonds of friendship not only with Canada, but also with other nations.

She explained that this time the space will have as central theme the creation of a language strategy that enables university students, especially those enrolled in this specialty, graduating with levels equivalent to those referred to in the European framework.

Other topics under analysis are referred to translation and interpretation, various aspects of culture, linguistic processes and French language in Cuban universities, which lack programs contributing to postgraduate studies of professionals in this field.

Paez also pointed out that the International Seminar on Canadian Studies, which this year celebrates its tenth edition and will be in session in parallel with the development of panels and conferences such as the so-called Cuba and Canada in the current context, is ascribed to WEFLA.

The event is expected to be attended by 200 delegates, including 130 foreigners from 13 countries like Canada, USA, Mexico, Argentina, Brazil, Germany, Spain and Belgium.

The conference on foreign language communication and culture, which began in 1996 with an international character, has received to date more than 350 professors from 70 universities and Canadian institutions.(Radio Rebelde)