Evo: CELAC Summit Will Be Important Against US Threats 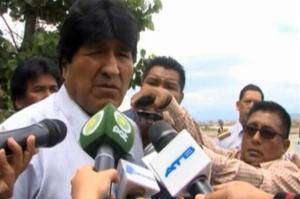 Evo: CELAC Summit Will Be Important Against US Threats

La Paz, Jan 25 – Bolivian President Evo Morales said today that the Fifth Summit of the Community of Latin American and Caribbean States (CELAC) will be an important forum to analyze the challenges posed by the administration of US President Donald Trump.

‘I feel that this summit will be very important to face the new threats of the American empire towards Latin America, but it will also lead the way to a deep debate of the presidents on economic and social policies for humanity,’ stated Morales in the central city of Cochabamba, minutes before the departure to Dominican Republic.

The locality of Punta Cana, in the Caribbean country, will host from this Tuesday the heads of State and Government of the nations of the hemisphere, with the exception of the United States and Canada.

The Bolivian leader valued in a brief press conference the significance of the integration mechanism created in 2011.

‘Ex Presidents Hugo Chavez, Luiz Inacio Lula da Silva, Nestor Kirchner, Fidel and Raul Castro (current president of Cuba), among others, created a political movement for the liberation and integration of Latin America and the Caribbean in the face of programs imposed from Washington,’ he said.

Likewise, he considered the policies of free market and commerce as well as the so-called neoliberal globalization promoted by the centers of hegemonic power since the end of the 1980s a failure.

For the head of state, the failure of competitiveness policies should be replaced by community socialism, under the principle of solidarity and economic and commercial complementarity.

Morales also thanked the accompaniment of social movements and peasant and indigenous communities to strengthen the political and cultural revolution that has been happening here since 2006.

In addition, he considered the recent changes in the Cabinet of Ministers as strategic, ‘for our process of change to continue’. (Prensa Latina)

This entry was posted in Florida and tagged CELAC, Evo Morales. Bookmark the permalink.