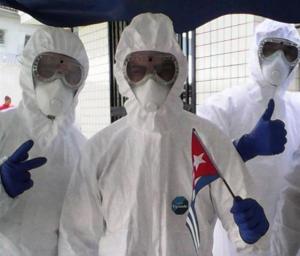 According to a statement released by the Cuban Embassy in Geneva, cited by PL, the decision was unanimously reached during the 140th session of the WHO Executive Board.

Established in 2009, the Doctor Lee Jong-wook Memorial Prize for Public Health recognizes the work of people, institutions and organizations that make a significant contribution to the field of public health.

The Prize was awarded to the Henry Reeve Contingent as a result of its solidarity efforts in various countries affected by natural disasters, and in recognition of the over 250 Cuban health specialists who worked in African nations combating the dangerous Ebola outbreak.
The statement recalls that the Henry Reeve International Contingent of Doctors Specializing in Disasters and Serious Epidemics was created on September 19, 2005, in Havana, by the historic leader of the Cuban Revolution, Fidel Castro.

According to the text, since its founding, 7,254 Cuban medical collaborators have offered services in 19 nations worldwide (twice in Haiti and Chile).

Meanwhile, healthcare professionals from the country, specially trained for such missions, have treated over 3.5 million people and saved some 80,000 lives, according to estimates.

The Prize will be presented during the 70th World Health Assembly, scheduled to take place May 22-31 in Geneva.(ACN)

This entry was posted in Cuba, International, Society and tagged Cuba's Henry Reeve Contingent, rewards, Solidarity, WHO. Bookmark the permalink.