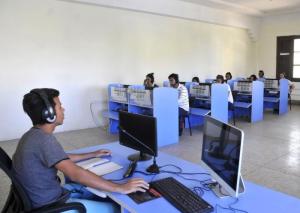 Cuba, Feb 11st – As part of the policy of perfecting higher education on the island, a command of the English language has come to occupy a central place, such that demonstrating solid knowledge of this language is now an obligatory requirement to graduate from university.

With a view toward the comprehensive preparation of students, since 2009 the Cuban Ministry of Higher Education (MES), in conjunction with the British Council (BC), has developed a program aimed at training English teachers.

The results are already palpable: this year for the first time the training was conducted by Cuban teachers, who were previously trained and certified themselves to ensure quality standards.

Approximately 3,000 English teachers have been evaluated through the Teaching Knowledge Test (TKT), an internationally recognized teaching qualification, developed by the University of Cambridge.

Likewise, some 1,000 professors from Cuban universities throughout the country have participated in English Language Teaching conferences and in workshops that have been organized on a regional basis.

Last but not least, 96 Cuban teachers have participated in the Professional Award in Teacher Development and have trained as teacher trainers in our universities.

Regarding the work with the BC, Santiago Jorge Rivera Pérez, national advisor for Foreign Languages at the MES Professional Training directorate, noted:

“The basis of these relations lies essentially in the need to prepare professionals whose comprehensive training allows them to exercise their roles and be able to impact all the society’s and national economy’s development processes.

“These relations have influenced training in English as a foreign language within the process of educating our students, which today has a unique characteristic, based on the concept of the new curricula that we are planning to implement.”

The MES has the deep conviction that knowledge of English needs to be incorporated as part of the training of Cuban professionals, as the most widely used international language, not only to facilitate academic exchanges with other institutions, but also to provide students with a comprehensive education.

The training that these teachers have received translates into concrete actions such as “a group of learning resources that are already available in higher education institutions and that have a direct relation to the international trends developing today in the English teaching field.”

Rivera Pérez concluded: “These considerations allow us to ensure that relations with the British Council can contribute elements of special significance to the policy of perfecting higher education in Cuba in general, and particularly to the command of English as a foreign language.”

According to its website, the British Council “is the UK’s international organisation for educational opportunities and cultural relations.” Professionals from the ministries of Education, Health, Foreign Affairs, Foreign Trade and Investment, and Culture, have participated in BC training courses in Cuba.(Granma)

This entry was posted in Cuba, Society and tagged Cuban universities, English language. Bookmark the permalink.