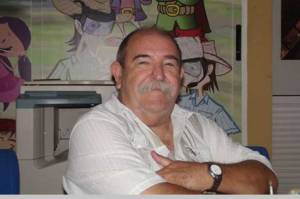 New York, Mar 30 –  Paintings, drawings and samples of representative works of Cuban caricaturist and film director Juan Padrón are to be exhibited in New York as part of the Havana Film Festival on his 70th birthday, said organizers.

According to sponsors of the event, the exhibition will be open to the public on Monday, April 3 at the Center Clemente Soto at 18:30 local time, an invitation to those who love the comics, fine arts and culture.

Besides recognizing the creator of emblematic Cuban Independence fighter Elpidio Valdes and ‘Vampires in Havana’, the venue will present a retrospective of films reflecting Cuban music and dances.

The program includes conferences, round tables and exchanges on the work of Latin American film direcrtors.

On the other hand, there will be relevant musicians of that nation like the pianist Chucho Valdes y Telmary.

Born in Matanzas in 1947, Juan Padron is considered one of the great figures in animation in Cuba and the world and has been awarded numerous prizes and decorations.

Besides the National Film Award in 2008 and that of Humor in 2004, he was invested with the order Juan Marinello and Felix Varela.

He has also had an outstanding participation in the New Latin American Film Festival where he has obtained numerous awards.(Prensa Latina)