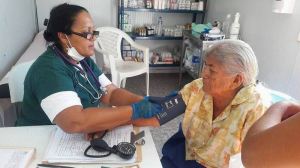 Cuba, Jun 16 – After more than two months of attending to the flood victims and those infected by a dengue epidemic in the city of Piura, Peru, the Cuban medical brigade is returning to the country today.

Doctor Regla Angulo, a member of the Central Committee of the Cuban Communist Party and director of the Central Medical Collaboration Unit, told the Cuban News Agency that the contingent is made up of 23 health professionals with an epidemiological profile, members of the Henry Reeve International Contingent.

That group arrived on March 31 in Lima and on the same day flew to Piura, that was almost totally flooded by the torrential rains that devastated several regions of that nation.

The head of the brigade, Rolando Piloto, thanked the tributes paid to the brigade by municipalities and other regional authorities, institutions and even private companies, as well as expressions of affection and recognition of the population for the work done.

They received various tributes among them from the Congress of the Republic, including congressmen from all political forces, and the Peru-Cuba Parliamentary League.

During its stay in Peru, that brigade carried out 24,349 consultations in Piura and in the camps that shelter thousands of families who lost their houses due to heavy rainfall, as well as in localities nearby.

Cuban specialists attended in the field hospital 972 people infected or with symptoms of dengue, and didn’t lose a single patient despite the fact that the epidemic has caused dozens of victims in the region.

Among other actions, the Cuban medical brigade visited more than 3,000 homes to treat people at their homes, in addition to four thousand medical consultations, the source said.

They also trained 350 health workers and volunteers in the house control of mosquitoes that carry the disease.(Radio Rebelde)