OPCW Director Receives a Cuban Government Representant in The Hague 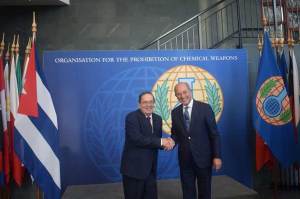 OPCW Director Receives a Cuban Government Representant in The Hague

The Hague, Oct 17 – Ahmet Uzumcu, Director-General of the Organization for the Prohibition of Chemical Weapons (OPCW), has received today Fernando Gonzalez Bermudez, Cuban Deputy Minister of Science, Technology and Environment (CITMA), who is visiting this city.

Uzumcu received Gonzalez Bermudez at the headquarters of the entity, located in this Dutch city, and both officials discussed several issues such as the current work of OPCW in the international context.

The OPCW director highlighted Cuba’s work in complying with the Convention on the Prohibition of Chemical Weapons and the cooperation offered in many issues such as dealing with emergencies caused by chemical agents.

The Cuban deputy minister expressed the country’s commitment with the Convention and expressed the favorable position to promote international cooperation as a key element for the prevention of a possible resurgence of chemical weapons.

He also called for a holistic approach to the issue of chemicals, and take into account that this is not only about weapons, but also about the peaceful use of the chemical industry in terms of development and environmental protection.

In this sense, the Cuban initiative to use the disused physical facilities of an old thermonuclear plant project in the central province of Cienfuegos for the production of energy, as a confinement of hazardous wastes, including chemicals, was used as an example.

According to the program, Gonzalez Bermudez will present ‘Task for Life’, a State Plan for confronting climate change, designed on a scientific basis to address the vulnerabilities of the Caribbean nation.

This agenda also includes a visit to the Scheveningen project, which consists of managing the rehabilitation of beaches.

Speaking to Prensa Latina, the deputy minister explained that he intends there to get acquainted with the Dutch experience in water and coastal management, as this is a leading country in the field. (Prensa Latina)

This entry was posted in Cuba, International, Society and tagged Cuban government, OPCW, receive, The Hague. Bookmark the permalink.