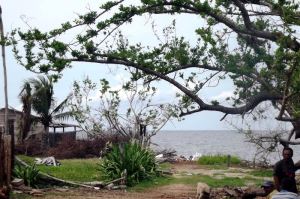 Cuba, Dec 15 – A group of important measures, contained in program Tarea Vida (Life Task), are adopted in Cuba with the aim of preparing the country to face the effects caused by climate change.
According to a report published today in the Granma newspaper, the island suffers the consequences of these transformations, which cause sea level and temperature rise and decrease in rainfall.

Sergio Lorenzo Sánchez, a researcher at the Institute of Marine Sciences, pointed out that studies of geology and geomorphology confirm that there is a retreat of the coastline from 1.5 to two meters annually.

The specialist indicated that there are readings of the National Mareographic Network that show an increase of 2.14 millimeters per year in the acceleration of the increase of the mean sea level.

Such changes have caused not only a reduction of the emerged territory and the rains, but also damages in the coral reef and the reef crests, which protect the archipelago from the strong waves.

To face these dangers, it is necessary to identify and undertake actions and projects to adapt to climate change, of an integral and progressive nature, aimed at reducing the vulnerability of coastal zones.

These actions must be supported by specific legal norms, which support the execution of the state plan, ensure strict compliance and punish violators.

Special importance is given to the preservation, maintenance and integral recovery of the sandy beaches of the Cuban archipelago, with priority for urbanized and tourist use.

With a view to guaranteeing water supply and mitigating the effects of the drought, we must work on the introduction of technologies for saving and satisfying local demands and increase the hydraulic infrastructure.

The reforestation should be directed towards the maximum protection of the soils and the waters in quantity and quality, as well as the recovery of the hydro-regulatory fringes, the most damaged forests and mangroves.

It is also necessary to stop the deterioration, rehabilitate and conserve the coral reefs throughout the national archipelago, with priority for the ridges bordering the insular platform and protecting the beaches.(Radio Rebelde)

This entry was posted in Cuba, Society and tagged climate change, Cuba, Measures. Bookmark the permalink.