Cuba Advocates at UNESCO for a Peace World 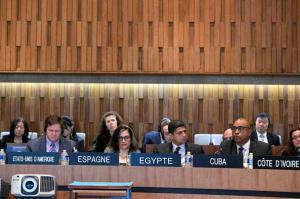 Cuba Advocates at UNESCO for a Peace World

Paris, Apr 10 – Cuba has advocated today at UNESCO for dismissing forever war, threat and force in the planet, and stressed UN potentialities to strengthen a peace world.

Cuban representative at the Executive Council, Oscar Leon, said this statement during the 204th session of that UN body.

The United Nations is ‘the better prepared international institution to strengthen international peace and security through education, culture, scientific knowledge and access to information. We need of this agency today more than ever to become men and women of peace’, he said.

Leon, who is also the president of the Cuban Commission of UNESCO, stressed as an inspiring element the statement of Latin America and the Caribbean as a peace zone, ‘a milestone in the history of our region.’

The representative emphasized in his speech Cuba’s commitment at UNESCO and the values it represents, as well as reaffirming the willingness to work together to reach the 2030 Development Agenda goals.

Leon Gonzales also stated that the Executive Council is meeting during a complex situation, in which ‘serious and imminent dangers are threating the existence of our specie, such as climate change, nuclear weapons and cultural intolerance causing armed conflicts and endangering peace.

Leon also said that ‘the multidimensional and systematic crisis accompanied of violations to principles and regulations of the international law impede the construction of a fairer world order, based on human solidarity, dialogue and cooperation.’

According to Leon’s statements, UNESCO is not exempt from that, as it has been living since 2011 the deepest financial crisis in history, as a consequence of the non-payment of its main taxpayer, the United States, which debits more than $600 million USD and has declared its withdrawal from the organization.(Prensa Latina)