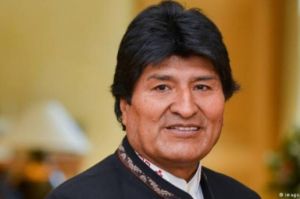 Havana, Apr 23 –  Bolivian President, Evo Morales, who is beginning an official visit to Cuba today, confirmed in this capital the support and solidarity of his country to the Caribbean nation.

Upon his arrival in Havana near midnight yesterday, the president sent a greeting to newly elected Cuban President, Miguel Diaz-Canel, and commented that the Caribbean nation has done much in favor of humanity.

In statements to the press, Morales recalled that the relationships between the two countries are very good, ‘of great confidence, but also of great hope for both peoples.’

According to the visitor, his stay on the island will allow progress in projects promoted by Cuban revolutionary leaders, Fidel Castro and Raul Castro, for the benefit of Latin America and the world.

Morales’ agenda in Havana includes meetings with the country’s top authorities, including Diaz-Canel.

The South American president will lay today a wreath to Cuban National Hero, Jose Marti, and then the reception and official talks with his Cuban peer will take place.

Morales is the second president to visit Cuba since Diaz-Canel was elected the President of the Councils of State and Ministers on April 19, replacing Raul Castro.(Prensa Latina)