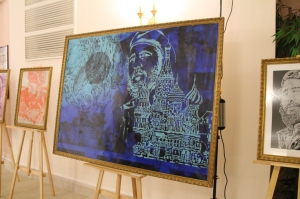 Moscow, May 16 – Russia and Cuba highlighted the importance of the paintings exhibition on Fidel Castro”s trip to the Soviet Union in 1963, presented today at the headquarters of the Moscow City Duma (regional parliament).

The exhibition open here is of great importance in the historic relations between Cuba and Russia for the friendship existing between both peoples, the president of that legislative body, Alexei Shaposhnikov, said.

That friendship was strengthened in times of the Soviet Union and now when we are in our times, we can say that our people are willing to continue the ties shoulder to shoulder, he said.

The exhibition shows how Fidel Castro’s visit to the Soviet Union was very significant, not only for us and Cuba, but also for the whole world, the legislator stated.

This was the largest and most prolonged visit of a foreign head of State in Soviet territory and Russia.

I believe no statesman had visited our country as Fidel did, because it lasted more than one month, said Shaposhnikov.

Everyone also remember the unforgettable more-than-two hour speech delivered by Fidel Castro at Lenin’s Mausoleum in Red Square, he said.

As Russian President Vladimir Putin stated on April 11, during the credentials delivery ceremony, Cuba is a secure ally of Russia, with which we maintain strategic ties, not only in the political, but also in the economic sphere, stressed the diplomat.(Prensa Latina)