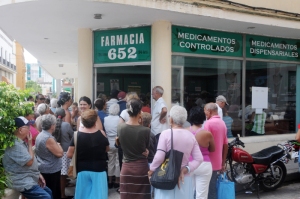 Cuba, Jul 20 – The Biotechnology and Pharmaceutical Industries Group (BioCubaFarma) works to stabilize the production and distribution of medicines.

The measures adopted to ensure the importation of raw materials and increase production levels have made it possible to reduce the number of missing products to 48, according to the information published today in the Granma newspaper.

Rita Garcia Almaguer, director of Operations and Technology at BioCubaFarma, said the greatest effort is concentrated on priority one or controlled drugs, of which 18 are not yet available.

She confirmed that of the 761 drugs that make up the basic table, 482 are produced by the domestic biotechnology and pharmaceutical industries, which represents about 82 percent of what is marketed in the retail network.

She said the main causes affecting drug production are the lack of timely financing for raw materials, packaging and other inputs, as well as domestic shortfalls.

This is a very specific industry, said Rita Garcia, in which, if a supplier stops offering a certain product, looking for another implies having to start a validation process of no less than three months.

She also highlighted the influence of the US blockade, which causes high costs due to the non-use of the dollar in transactions, difficulties in banks and having to use third countries.

However, the industry is making a considerable effort and is also working to improve the logistics cycle so that medicines are available at the time and in the quantities required by patients.

To this end, the Cuban Biotechnology and Pharmaceutical Industry foresee an investment plan of more than two billion dollars until 2030, which will contribute to expanding production capacities with high standards.(Adelante)