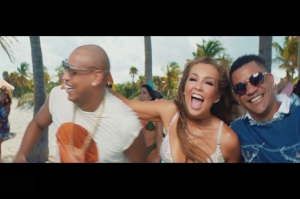 Mexico, Sep 28 – Mexican singer Thalia and Cuban duo Gente de Zona premiere on Friday the song Lento(Slow), which is accompanied by a video recorded in Miami.

Thalia described the combination with the Cubans as very powerful, full of joy, happiness and partying.

Lento is the second single from his new album Valiente(Brave), which will be released on November 9.

The song is about ‘a love story between an artist and her bodyguard,’ she said in an interview with the Mexican Publishing Organization.

The accompanied video is directed by Santiago Salviche and Pedro Vazquez,and has a romantic story.(Prensa Latina)