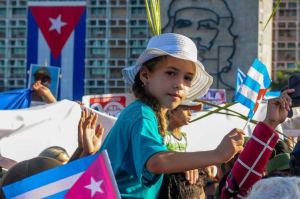 Havana, May 9th – Helms-Burton Act is an outrage to the sovereignty of Cuba and an excuse to economically choke the island, Granma daily stresses on Thursday.

In an extensive article dedicated to such US legislation that came into force in 1996, the newspaper recalls that Cuba approved that same year a law, which declares the Helms-Burton null, without any value and therefore inapplicable on the island.

It also confirms the extraterritorial nature of the Act that disrespects international law and punishes third countries and companies for their relations with Cuba.

The intention to compensate potential claimants of US nationalized properties in Cuba after the triumph of Revolution is just a pretext causing the most turmoil, the text points out.

Granma highlights that such a ‘legislative instrument’ denies in sovereignty terms everything that Cuba has conquered and consecrated in its Constitution with the majority support of the people.

Article 16 of the Cuban Constitution restates that economic, diplomatic and political relations with any other State can never be negotiated under aggression, threat or coercion, Granma newspaper underscores.

Likewise, it condemns the direct or indirect interference in the internal or external affairs of any State and, therefore, the armed aggression, any form of economic or political coercion, the unilateral blockades that violate International Law, or any other type of interference and menace to the integrity of States,’ the journal concludes.(Prensa Latina)