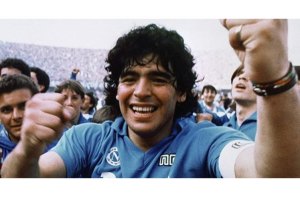 Paris, May 21 – The documentary ”Diego Maradona”, focused on the life of the Argentine soccer star, aroused passions during the Cannes Film Festival, whose sessions continue on Monday in that southern French city.

The two-hour film, directed by Asif Kapadia, was released out of competition, amid the enthusiasm of the attending public to relive several feats of the Argentine player.

The film tells of Maradona’s beginnings in soccer, his humble origin, the rise of his career, success in Naples, and also the difficulties that led him leave that Italian club.

On many occasions, the public attending the premiere broke into ovations in fragments as the 1986 World Cup final match, in which his two goals allowed the Argentine victory against the United Kingdom, a fact considered the Argentinian rematch for The Falklands war.

The festival looked forward to Maradona’s presence at the screening, but it was impossible due to health problems, according to reports.

In addition to these films, Latin America has been present in these last days with two other documentaries: ‘La Cordillera de los Sueños’ (The Mountain Range of Dreams) (Chile) and ‘Que Sea Ley’ (Let It Be Law) (Argentina).(Prensa Latina)