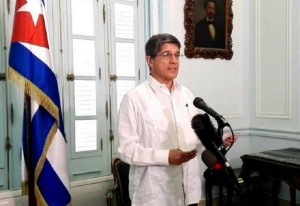 Cuba, Jun 1st – Washington is today totally isolated in its policy against Cuba, said the general director of the United States Directorate of the Cuban Foreign Ministry, Carlos Fernández de Cossío, in an appearance on national television the eve.

The Cuban diplomat expressed his opinion on the implications of the Helms-Burton Act against Cuba, a document that codifies the US blockade to Cuba.

De Cossio stressed that the activation, since May 2, of the Title III of that legislation, is part of a set of aggressive actions against the island promoted by the current administration of President Donald Trump.

This Title III opens the doors to demands in US courts regarding properties of citizens of that country that were nationalized by the Cuban Revolution, according to national laws and International Law.

The Cuban ambassador refuted the White House’s argument that Cuba is a threat to the security of the northern country and a destabilizing factor in Latin America.

‘Anyone who knows a bit of history knows that it is not our vocation to be a threat to anyone,’ he said, assuring that Cuba ‘is recognized for promoting peace and stability in the region.

‘Those who have managed to take over U.S. policy know that time is against their extreme positions, because the majority of the people of the United States do not support the blockade of Cuba, and because the majority of Cuban Americans today prefer an improvement and a normal and respectful relationship with their country of origin,’ he said.

De Cossío reiterated his government’s position to reject the claims made by the Helms-Burton Act and confirmed that none of the state entities that have been mentioned in press reports among the attempted challenges, have been notified.

He emphasized that the United States isolates itself in its obstinate intention to encircle Cuba and mentioned statements against that practice on the part of the European Union, Spain, Canada, Russia, Japan and the Caribbean Community, among other states and institutions.

This entry was posted in Cuba, International, Society and tagged against, Cuba, Isolated, Policy, US. Bookmark the permalink.