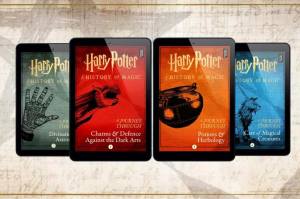 London, Jun 4th – The renowned British writer J.K. Rowling, creator of the Harry Potter saga, announced on Monday the publication of four new electronic books related to this series of novels, next June 27.

According to the writer’s publisher, Pottermore, in addition to exploring the origins of magic through history and folklore, the e-books will also include notes, pages of manuscripts and enchanting drawings as previously seen in Harry Potter: A Story of Magic.

The first two ebooks (digital books) will see the light on June 27, while the last pair will do so shortly thereafter, announced their managers.

All volumes will be designed by the British Rohan Daniel Eason.

Initially, the books will be available in English, French, Italian and German, through the main purchasing platforms.(Prensa Latina)

This entry was posted in Arts, International and tagged J.K. RowlingAnnouncesNew Books, World of Harry Potter. Bookmark the permalink.