Cuba pays tribute to Vilma Espin, 12 years after her death 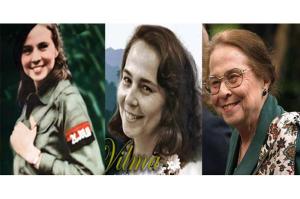 Cuba pays tribute to Vilma Espin, 12 years after her death

Havana, Jun 18 – Cuba remembers this Tuesday Vilma Espin, one of the main historical figures of the Cuban Revolution, on the twelfth anniversary of the death of this tireless fighter for the emancipation of women.

The leader Revolution, Fidel Castro, highlighted on more than one occasion Vilma’s consecration in the struggle for the defense of the rights of Cuban women, when, he said, ‘in Cuba the majority of them were discriminated against as human beings as in the rest of the world, with honorable exceptions (…).’ Born on April 7, 1930 in the eastern province of Santigo de Cuba, from a well-to-do family, Vilma, as Cubans affectionately remember her, defended during all her life dignity, emancipation, justice and equality.

In her book ‘Vilma, an extraordinary life,’ Asela de los Santos, who shared with her in countless moments of her life, assured that she rejected luxuries and banalities and always maintained an ethical sense in all her actions along with great moral principles, which made her a natural leader and an example to follow.

From a young age, she assumed revolutionary political positions, and actively participated in student demonstrations following the March 10, 1952 coup d’état by dictator Fulgencio Batista, according to historians.

She collaborated with revolutionary leader Frank Pais in operations in the eastern region of Cuba against the dictatorship, until she joined the July 26 Movement.

After the triumph of the Revolution, on January 1, 1959, she devoted herself to the struggle for the emancipation of women and founded the Federation of Cuban Women (FMC) on August 23, 1960, to unify in a single organization actions geared to empower women in society.

Vilma also presided over the parliamentary commissions on Prevention and Social Care, as well as the commission on Children, Youth and Equal Rights for Women.

Among awards received, the title of Heroine of the Republic of Cuba, the Ana Betancourt Order and the Francisco de Miranda of Venezuela, presented by the late leader Hugo Chavez stand out.

Vilma died on June 18, 2007 in Havana and her remains rest in the Mausoleum of the Second Eastern Front Frank Pais, a historic place located on the Micara mountain in the eastern zone of Cuba.(Prensa Latina)