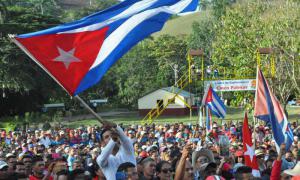 On June 20, 2019, the US State Department added Cuba to the lowest tier in its 2019 Trafficking in Persons Report. The Report claims that “Cuba does not fully meet the minimum standards for the elimination of trafficking and is not making significant efforts to do so.”

This ranking has conceivably nothing to do with Cuba’s true performance in actively combating trafficking in persons and the Ministry of Foreign Affairs absolutely rejects it for being a complete slander.

The US government has no moral or political authority to judge sovereign States or issue certificates of conduct. It is well known that this unilateral report, totally void of any international legitimacy or recognition, which is published every year by the US State Department, is simply a political and manipulative instrument used to exert pressure on other States, without any respect or consideration and in full disregard for international efforts to combat trafficking in persons.

It deliberately ignores the exemplary and comprehensive work carried out by Cuba in the prevention and combat of this scourge. It overlooks the zero-tolerance policy implemented by our country against trafficking in persons and fails to refer to the results of the exchanges that, for five consecutive years, were held between both countries to share information and cooperate in these matters.

It rather omits the fact that the low incidence of trafficking in persons in Cuba is associated to its social achievements, public safety, equal opportunities and the policies and programs designed to empower women. The Report also ignores the fact that free access to health care, education, culture and sports contributed to reduce the country’s vulnerability and strengthens its capability to increase international cooperation in this area.

Cuba has achieved a world renowned prestige in the implementation of the National Plan of Action to Prevent and Combat Trafficking in Persons and Protect its Victims (2017-2020), something that the US performance in this field has failed to achieve.

As has been evidenced, the use of slanders and disparagement campaigns against Cuba, which overlap beyond control, is intended to justify the noticeable hostility of the US government against Cuba and the increasing unilateral blockade and economic coercion measures aimed at deteriorating the living standards of the population, restricting the country’s financial inflows, hindering supplies imports, hampering production processes and affecting social services. It is part of the ceaseless economic warfare that has been waged against during the last sixty years.

The United States are one of the countries facing the highest number of cases of trafficking in boys, girls and women in the world. Despite the fact that some US specialized sources, like the National Human Trafficking Resource Center based in Washington DC, estimate that trafficked persons in that country amount to hundreds of thousands, who are faced with a serious situation of associated labor exploitation, the authorities of that country have recognized that they can not even determine the real statistics of this scourge. That is to say, they have neither the means nor the capability or the willingness to evaluate the problem, much less to solve it.

Equally well known is the fact that 85 per cent of legal proceedings filed for that reason in the US are cases of sexual exploitation; and that out of the one million children fleeing their homes, more than 300 000 are subject to some form of exploitation, according to the National Human Trafficking Resource Center itself.

The US State Department Report is also an onslaught against Cuba’s international medical cooperation. It attempts to defame the legitimate South-South cooperation practiced by developing countries, which Cuba is part and proud of. That effort, that has been joined on a voluntary basis by hundreds of thousands of Cuban professionals for almost six decades, has had the merit of saving or contributing to save the life of millions of persons and alleviate the pain of several millions in more than 160 nations that, hadn’t it been for that contribution, would have been faced with serious difficulties to have access to medical services.

The Ministry of Foreign Affairs reminds the government of the United States that the relocation in third countries of the arrangements to be made by Cuban citizens to apply for a US visa, without any guarantees that the visa would be ultimately granted, increases considerably the cost of the process and the travels, thus placing many citizens in a vulnerable situation, facing up the criminal gangs devoted to trafficking in persons in other parts of the world.

The international scourge of trafficking in persons is, first and foremost, the result, in particular, of capitalism game rules, which conceive human beings as interchangeable goods, as if they were property, money or capital.

This entry was posted in Cuba, International and tagged against, Cuba’s performance, judge, no authority, trafficking, United States. Bookmark the permalink.