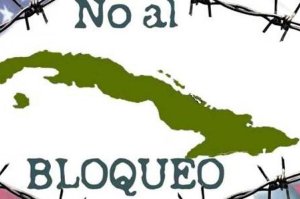 Beijing, Jul 9 – Cuban residents in China on Monday denounced the intensification of the hostile policy by the United States against their country and the objective of further hindering development with measures that tighten the economic, financial and commercial blockade on the Caribbean island.

During a meeting at the Cuban Embassy in Beijing, that community condemned Washington’s efforts to suffocate the island nation with actions aimed at hindering progress and increasing deficits in all spheres of society. However, they expressed their conviction that it is another test that Cubans will pass again with more unity and initiatives to counter the White House’s maneuvers.

‘The blockade is like a wall through which we have to go on our own with intelligence and patience. We have to be united so that domestic decisions become the master key to open the doors to prosperity,’ the journalist Abel Rosales told Prensa Latina.

He noted that this hostility forces Cuba to create its own path to development, and predicted its end sooner or later ‘in light of the strength of good actions’.

Meanwhile, Chef Miguel Nicolao called on his compatriots to remain aware, united and to continue to work as they have done so far, because during the six decades of the Cuban Revolution, it has always been under the US siege and it has always resisted it.

‘More than one thousand like (President Donald) Trump have passed and they have not been able to defeat Cuba. I don’t think this will do,’ said Nicolao, who demanded an end to all punitive measures taken by the US Government.

Similar statements were made by Anaisy Antunez, who also urged to redouble the struggle against the blockade and condemned the damage caused to all citizens in Cuba and abroad.(Prensa Latina)

This entry was posted in Cuba, International, Society and tagged China, Condemn, Cuban Residents, US Hostility. Bookmark the permalink.