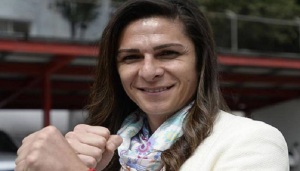 Before returning to her country, she told the press that the goals of this trip to the Caribbean island were met, as they analyzed the possibilities of continuing and strengthening the ties of sports cooperation between both nations.

The Athens 2004 Olympic runner-up in the women´s 400 meters, also stressed the admiration she feels for the Cuban people to whom she owes a lot in her training as an athlete and wished them many successes in the 18th Pan American Games to take place in Lima, Peru, from next July 26 to August 11.