In Florida, a provincial act for the 175th Anniversary of the birth of Antonio Maceo and the 92nd of Ernesto Guevara de la Serna (+ Audio) 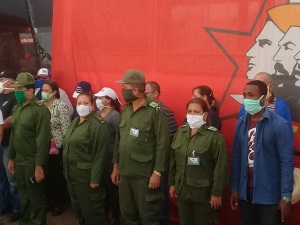 Florida, June 15.- The young Floridians were the hosts this Sunday of the provincial commemoration for the 175th Anniversary of the birth of Antonio Maceo and the 92nd of Ernesto Guevara de la Serna, amidst the agricultural work that they systematically carry out at the Pole productive Paradise.

Ariel Santana Santiesteban, President of the Defense Council in Camaguey and Yoseily Góngora López, Vice President of that management body, presided over the meeting where the cards were presented, which accredited new members of the Union of Young Communists and others received recognition for their outstanding work in the multiple tasks they perform.

The young people of Camagüey paid tribute to Maceo and Ché this June 14 in the municipality of Florida, located in the center-west of the Agromontine province where the militants of the Union of Young Communists are protagonists in planting food for the people and the numerous tasks deployed during the current COVID-19 contingency.

This entry was posted in ingles and tagged Act, anniversary, Florida, provincial. Bookmark the permalink.