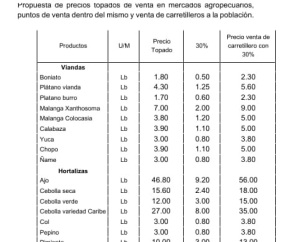 Florida, Dec 30.- At an extraordinary meeting of the Florida Municipality’s Board of Directors this Monday, new price caps were approved for products and services provided by local gastronomy, as part of the measures applied to protect the purchasing power of the population and guarantee the correct implementation of the monetary regulation task.

Price limits are established for the sale activities of cafes, restaurants and other gastronomic units of the state sector with a profit margin up to only up to six percent above the cost of production or value of each product in the wholesale market, while for this type of self-employed services, a profit margin of between 25 and 30 percent is approved.

Within the forms of non-state management, most of the price caps previously approved for the sale of beers, soft drinks, malts and packed juices are maintained, with a similar profit margin of between three and five pesos for each product.

To cite some examples, the 350 milliliter bottled Tínima beer can be purchased in the wholesale market for 10 pesos each unit and its sale price to the population should not exceed 15 pesos; as well as the Bucanero and Cristal beers with a maximum value limited to 35 pesos.

It is clarified that the sale price of products such as cookies and other jams in the different formats should not have profit margins greater than 25 percent, which in this case obliges the owners of the establishments to show during each inspection the Proof of purchases of the goods to justify their values.

In the case of gastronomic services managed by the state administration, new prices stand out, such as Neapolitan pizzas from 12 to 15 pesos, spaghetti from 17 to 18, hamburgers up to five and ice cream up to seven pesos a scoop.

During the extraordinary meeting of the Municipal Administration Council, it was clarified that these prices are formed and approved on the basis of the increase in the values ​​of the products in the wholesale market before the task of ordering the monetary and exchange rate of the country.

In addition, it was specified that for training each rate is approved between the priority of protecting the purchasing power of the population from the new approved salaries and the need to optimize the efficiency indicators in the socialist business system, to minimize subsidies and avoid the suffrage of economic losses with the state budget.

Soon it will also be the responsibility of the Municipal administration in Florida to establish limits at the local level for the new price rates within the transportation activity; and on the other hand, it was reported that proposals are being studied to provide tax cuts to those self-employed who offer services in prioritized institutions such as schools or hospitals, with the aim of reducing the prices of some of their products or benefits.

For the correct implementation of the measures approved as part of the Ordering Task and the economic and social strategy of the country, also in the municipality of Florida it will be essential to increase the controls and the demand both on the part of the administrations and the people, defending their consumer rights in each establishment or place.

This entry was posted in ingles and tagged approved, gastronomy, offers. Bookmark the permalink.