Artists and writers of Cuba committed to improving education 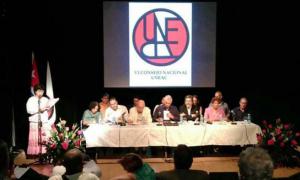 Artists and writers of Cuba committed to improving education

Cuba, Nov 10 – The National Council of the Union of Writers and Artists of Cuba (UNEAC) held its Sixth meeting, November 9, in the Theater of Havana’s National Fine Arts Museum.

The meeting focused on presenting and discussing the work of the Education, Culture and Society Standing Committee. In a report council members highlighted the close ties established between members of the Committee and Mined specialists in the third process of educational reform being undertaken by the ministry.

Regarding such efforts, Díaz-Canel highlighted the links that have been developed between the two bodies. “Joint efforts between the Ministry and UNEAC have borne fruit in this improvement process. This is an example of how civil society is contributing to perfecting public policies as important as educational policies.”

Work has been conducted in an inclusive way and interesting proposals have been made, he added, before highlighting that “our vision is a humanist one, the great challenge is to ensure that education is expressed in the form of values in the new generations.”

We must continue to perfect our efforts in order to keep moving forward, concluded Díaz-Canel.
Meanwhile, Ena Elsa Velázquez, minister of Education, also commented on joint efforts between the organization and UNEAC, noting that the greatest strength of this third reform process “is the contribution we have had from personalities, institutions and researchers from around the country. Now we must use our intelligence to bring together all the proposals.

“The future of the homeland is in our educational institutions, hence the importance of teachers. If our teachers are not adequately trained, the priorities we are focusing on will not reach our students. Our main objective is the comprehensive training of students,” she stated.

During the meeting – in addition to the presentation of the report by Helmo Hernández, president of the Committee – specialist Alberto Valle from the Central Institute of Pedagogical Sciences, reviewed changes made in various teaching fields; while Iván Barreto, director general of Cuban software enterprise Cinesoft, spoke about didactic programs, technological tools for teachers, and applications developed over recent years by the entity for different kinds of education.(Granma)